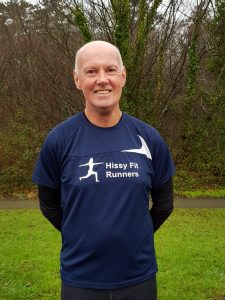 “My late father must take the blame for encouraging me to take up running as we used to watch the London Marathon together each year and each year I would always say I would do a marathon. Finally in 1984 I decided I would run the Dublin Marathon. Being a young unknowledgeable runner, but fit from playing rugby and soccer, I found it very easy but made the mistake of not recovering properly as I ran every day after the marathon until I had such a bad experience in a 5-mile race two weeks after, I actually gave up running and turned to Golf.

When my father was diagnosed with cancer in 2002 I knew I needed to try and get back running again to try and help with the stress I was going through looking after him and when he passed away I decided to run the London Marathon in his memory.

3 Dublin Marathons, 2 New York, Chicago, Berlin and Boston later and hopefully Dublin in October 2015, I am still going but my view of running has changed now from pushing myself to try and achieve times to now helping others try and achieve their goals.

Due to redundancy in April 2015 I decided I would like to try a different direction from working in the financial industry and completed a Diploma in Sports Psychology Course which I passed with merit in May and have since started working as a running coach with Corporate Running Groups which I am finding very rewarding to see people progress from struggling to run for 1 minute in Week 1 to completing a 5K in week 8, progressing then to 10K distance and also enjoying running which is what exercise should be all about.

I completed Athletics Ireland Level 1 Course in Athletics Coaching in 2009 and plan to progress to Level 2 in 2016.”